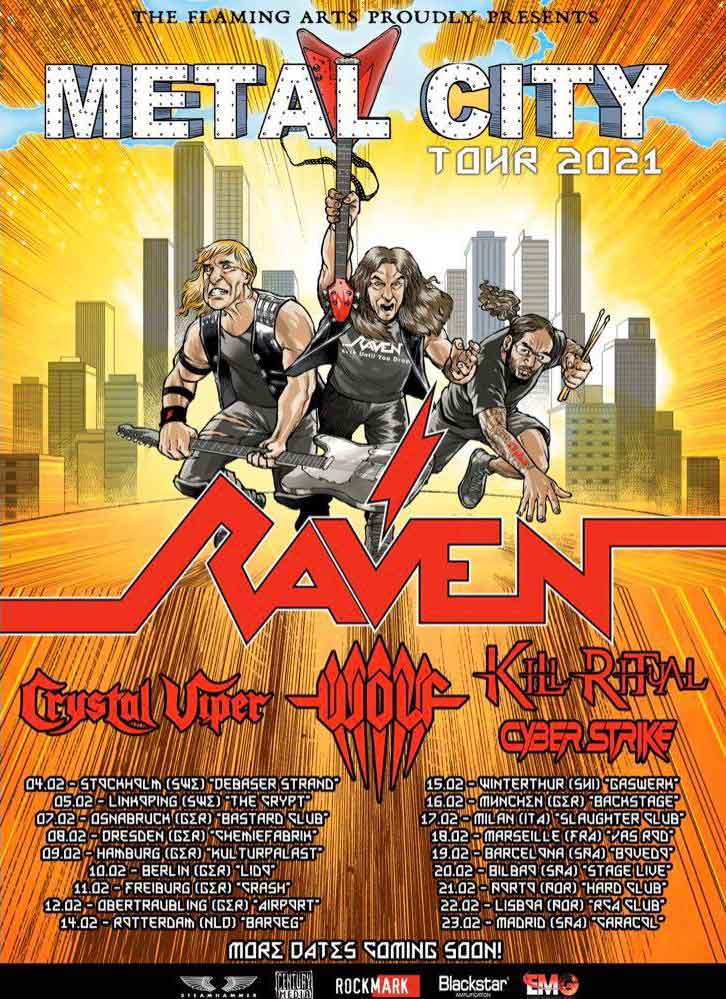 Published on: Sep 4, 2020
Metal maniacs RAVEN are to release their fourteenth studio album ‘Metal City’ September 28th on SPV and will be on your in Europe during February 2021, supported by WOLF, CRYSTAL VIPER, KILL RITUAL and CYBER STRIKE.
Formed in Newcastle, England, by brothers John Gallagher and Mark Gallagher with wunderkind Mike Heller on drums, RAVEN are considered to be The Godfather’s of the NWOBHM and a major inspiration on the development of the thrash metal genre, including bands such as ‘the big four’, Testament, Exodus, Overkill, Kreator, and more. RAVEN has a reputation as an extremely energetic live band, so make sure to witness these legends throw a mind-blowing live show consisting of classic hits and tracks from the new record!Swedish heavy metal masters.
WOLF were originally formed back in 1995 and belong to the earliest bands resurrecting and rejuvenating a traditional heavy metal sound during the 90’s when ignorant folks pronounced heavy metal dead. Inspired by the likes of Iron Maiden, Metal Church, the NWOBHM, Mercyful Fate/King Diamond, Judas Priest, and classic speed metal from Canada to Germany, WOLF laid down the groundwork for what became a triumphant return of proper 80’s influenced metal in the following years over the course of 8 albums.
CRYSTAL VIPER are an expressive female-fronted heavy metal band, founded in 2003 by Marta Gabriel.  With 7 studio albums in their pocket and a solid fanbase from North America to Japan, the band is stronger than ever and is working on the next full-length record, scheduled for the release in early 2021. Watch them burn the stage down within the Metal City tour lineup!

KILL RITUAL are about guitar-oriented traditional heavy metal influences molded into a powerful, modernized machine. Screams from hell to classic rock and metal voices all come to light in the band’s fifth album, “The Opaque And The Divine”, released in March 2020. The band makes a perfect completion of this tour for heavy metal hearts.