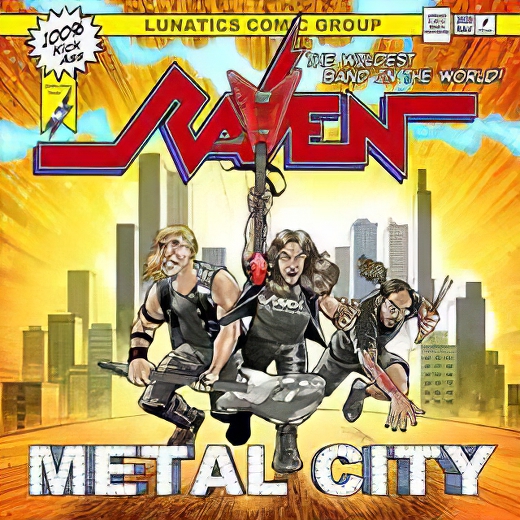 British/American metal trio RAVEN released a new single and lyric video for the song “Top Of The Mountain” today. The track is taken from the band’s upcoming album, “Metal City”, due on September 18 via SPV/Steamhammer as a CD digipak, LP, bundle version with shirt (only at the Steamhammer shop), download and stream.

It’s often small things that can give powerful impetus to a musician’s creativity. In the case of USA-based metal trio RAVEN, featuring the English brothers John (bass, vocals) and Mark Gallagher (guitar), it was the unanimously positive reactions to their 2015 release “ExtermiNation”, and, of course, the arrival of drummer Mike Heller (he joined the fold in summer 2017 to replace Joe Hasselvander, who had left the band due to health issues), which has resulted in an awesome new album.

“Our initial goal was just to raise the bar once more. We did a good job on ‘ExtermiNation’ and decided we just wanted more of everything next time,” John Gallagher says. “However, things changed once we got Mike on board. Attitude and tempos got revved up a lot! Mike is a ball of energy. He has a good ear and is a big fan of the early albums, especially the crazy feel. He’s kicked us into a higher gear where we feel that we can play anything and everything we write with no restrictions.”

This past May, John Gallagher told The Metal Voice about “Metal City”: “We have had this pain-in-the-ass process of getting the new album. Just about every hurdle or impediments that you can invent got put in the way of it. I think it’s gonna blow a lot of people’s minds. We’ve got Mike Heller on drums, who’s phenomenal, as people who have seen us over the last couple of years can testify. I guess you can take the live album we put out last year ‘Screaming Murder Death From Above: Live In Aalborg’, and that is a good introduction as to what we’re gonna be dealing on this new studio album. It’s fast, it’s crazy, there’s a lot of insane playing on it, and we really just went balls out all the way through. We’re incredibly happy with it. And so far, the people who have heard stuff are, like, ‘Are you fucking kidding me?’ [Laughs] So, it’s a good reaction to get.”

Asked which previous RAVEN album the upcoming effort will be musically closest to, John said: “It’s basically as if we time traveled back to 1982 and were doing the album after ‘Wiped Out’, continuing in that vein. It’s got a lot of that sensibility. There’s a couple of really, really fast songs. It opens up with a killer one called ‘The Power’, and then there’s a fast one called ‘Human Race’. And there’s an epic one called ‘When Worlds Collide’, and some good rock and roll RAVEN-style as well.”
Considered part of the “New Wave Of British Heavy Metal” movement of the early ’80s, RAVEN is perhaps best remembered for its trailblazing tours in America in the early ’80s that gave groups like METALLICA and ANTHRAX their first taste of the road.

RAVEN‘s albums “Rock Until You Drop”, “Wiped Out” and “All For One” virtually invented both the speed metal and power metal genres, with the band consistently pushing the envelope while retaining its unique sound and attack — both in the studio and in their true element: onstage.